How to Survive Black Fly Season in the Adirondacks

Post summary: How to avoid black flies during black fly season in the Adirondacks.

If you’ve spent any time in the Adirondacks in the spring or early summer, then you’re likely all too familiar with the tiniest, most irritating, blood sucker in the whole United States – the dreaded black fly. In fact, you’re probably groaning in agreement as you think back to the incessant buzzing hounding you for miles.

For those who aren’t quite as familiar, we’re not talking about the common housefly here. We’re talking about the black fly – also called the ‘buffalo gnat’ – that emerges every spring to wreak havoc on unprotected hikers, fishermen, and anyone else trying to enjoy time in nature.

These little blood suckers are, at best, about 0.5 inches long (about the size of an aphid), and they deliver a bite comparable to a bee sting. 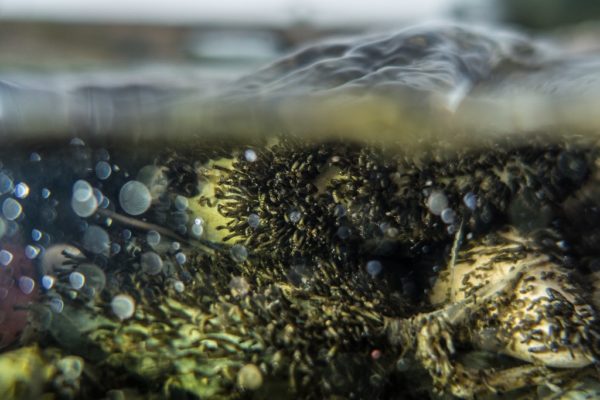 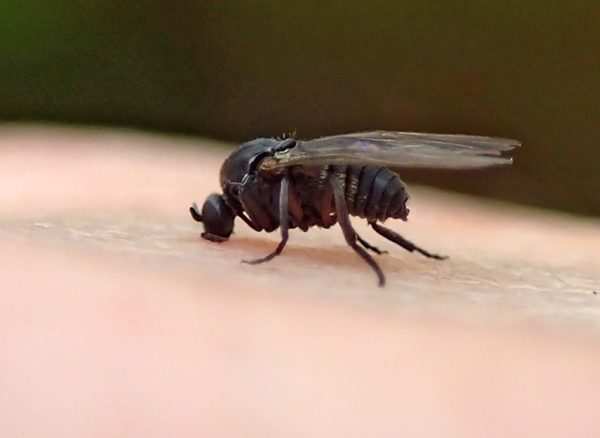 Here are a few of the best ways to keep Adirondack black flies at bay (keep reading for more):

If you’ve never had the pleasure of being swarmed by black flies, then it’s super easy to write them off as just a bit of an annoyance. But that’s a mistake you’re sure to only make once!

These little devils are nothing to take lightly. If you’re visiting the Adirondacks during the notorious “Black Fly Season”, it’s in your best interest to be mentally and physically prepared.

Here’s everything you need to know about surviving Black Fly Season in the Adirondacks:

.
Before we dive in to the details of surviving black fly season in the Adirondacks, it’s helpful to review a bit of “black fly 101”, to help better understand when and where they tend to hangout.

These little blood suckers are, at best, about 0.5 inches long – about the size of an aphid. They’re easily identifiable by their pointed rear, downward facing head, and humped back – hence the nickname ‘buffalo gnat’.

They’re semiaquatic insects, spending the majority of their lives in fresh, flowing water.

The life cycle of a black fly is about 40 days long (about 40 days too long, in my opinion). Over the course of their life, female black flies lay around 500 eggs, which hatch within about a week.

Once they hatch, the females set off in search of blood, in order to lay more eggs…and the seasonal Adirondack black fly torture begins.

The female black flies will travel up to 10 miles for a blood meal, which is when they’ll attack unprotected hikers, campers, fisherman, and anyone else who ventures into their territory.

When and where are black flies the worst in the Adirondacks?

.
Black fly season marks the beginning of springtime in the Adirondacks, and lasts from about mid-May to mid-July.

How bad the black flies are mostly depends on the time of day and on the weather. Black flies are generally most active a few hours after sunrise and just before sunset.

However, if the weather is humid and cloudy, the flies are at less of a risk of dehydrating during midday hours, so all rules go out the window and they will will hound you all day long.

Your only saving grace is that they can’t fly in wind. That goes for pretty much any wind. So if there’s a slight breeze, you should be fine…or at least better off.

Black flies tend to be the worst in areas with a lot of leaf litter and near moving water in heavily wooded areas, like rivers and streams. This is why you’re most likely to encounter them when you’re spending time in or near the woods.

YOU MIGHT LOVE: Short Hikes with Incredible Views in the Adirondacks

How do they even find humans, anyway?

If you’ve spent any time in the Adirondacks during black fly season, then you may be all too familiar with the “Adirondack Wave”, or the frantic waving and swatting of the air, often accompanied by a bit of a jog – or sometimes even a flat out sprint. It’s often used as a desperate attempt to keep black flies from landing and biting.

Because it seems no matter what you do or how quietly you walk, the little vampires always seem to find you with laser sharp accuracy almost immediately. And then they tell all of their friends.

I mean, how do they even find us so fast, anyway? Well, there are two ways: 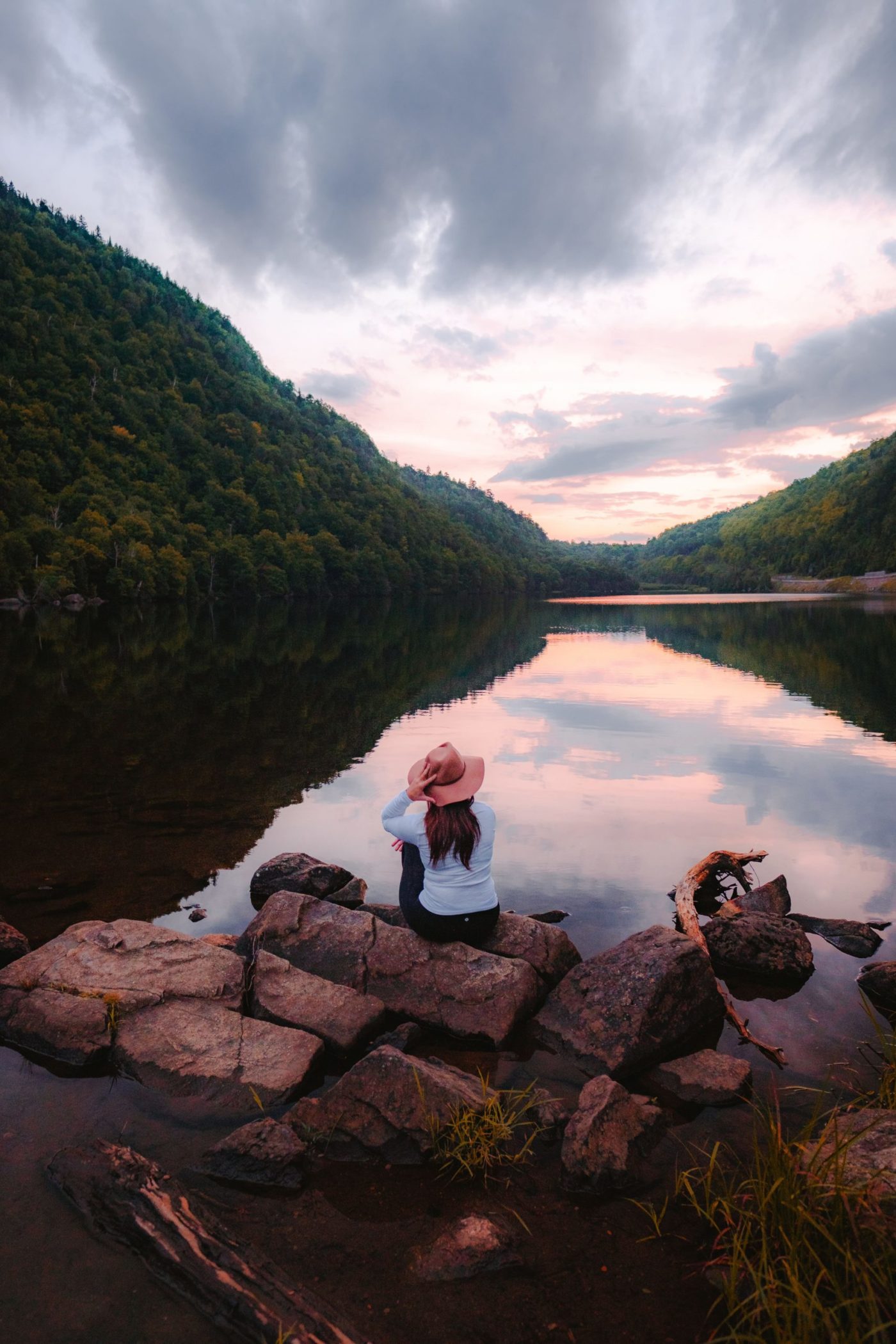 Not pictured: the 1000 black flies that come out just before sunset in the springtime
.

What to know about black fly bites

In general, black fly bites are not harmful to humans in the United States.

Although they’re known to carry diseases in certain parts of the world, they’re usually harmless to humans in North America.

However, sometimes swarms of black flies can be really dangerous, such as when the swarms get so thick that they have potential to block airways, or when they cause a lot of bites at once, which can cause serious adverse reactions.

You’ll normally run into huge swarms around fast moving bodies of water in black fly season, because that’s where the females lay their eggs. So if you’re venturing out to a pond, lake, waterfall, or river during springtime in the Adirondacks, its best to be ultra prepared.

But even if you don’t get swarmed, it doesn’t mean you won’t escape your outing unscathed. Black flies tend to congregate, so you’ll often get ambushed from all angles, even if its just by a handful of them.

And, although one black fly bite won’t kill you, their bites are horribly unpleasant and best avoided at all costs.

Why do the bites itch for so long?

Black fly bites pack an enormous punch for something so small. Although a bite from a black fly won’t kill you, its sure to be painful and  leave a mark that’s red, swollen, and horribly itchy.
.
The bites are comparable to a small bee sting. They hurt so bad because the fly literally cuts a hole in your skin with its sharp little mouthparts in order to suck your blood. The itch follows shortly after, as a result of the anticoagulant in the black fly’s saliva, which makes the blood flow more freely – similar to a mosquito bite.
.
I’ve found that a general After Bite cream or anti-histamine typically eases the itch until the bites go away.
. 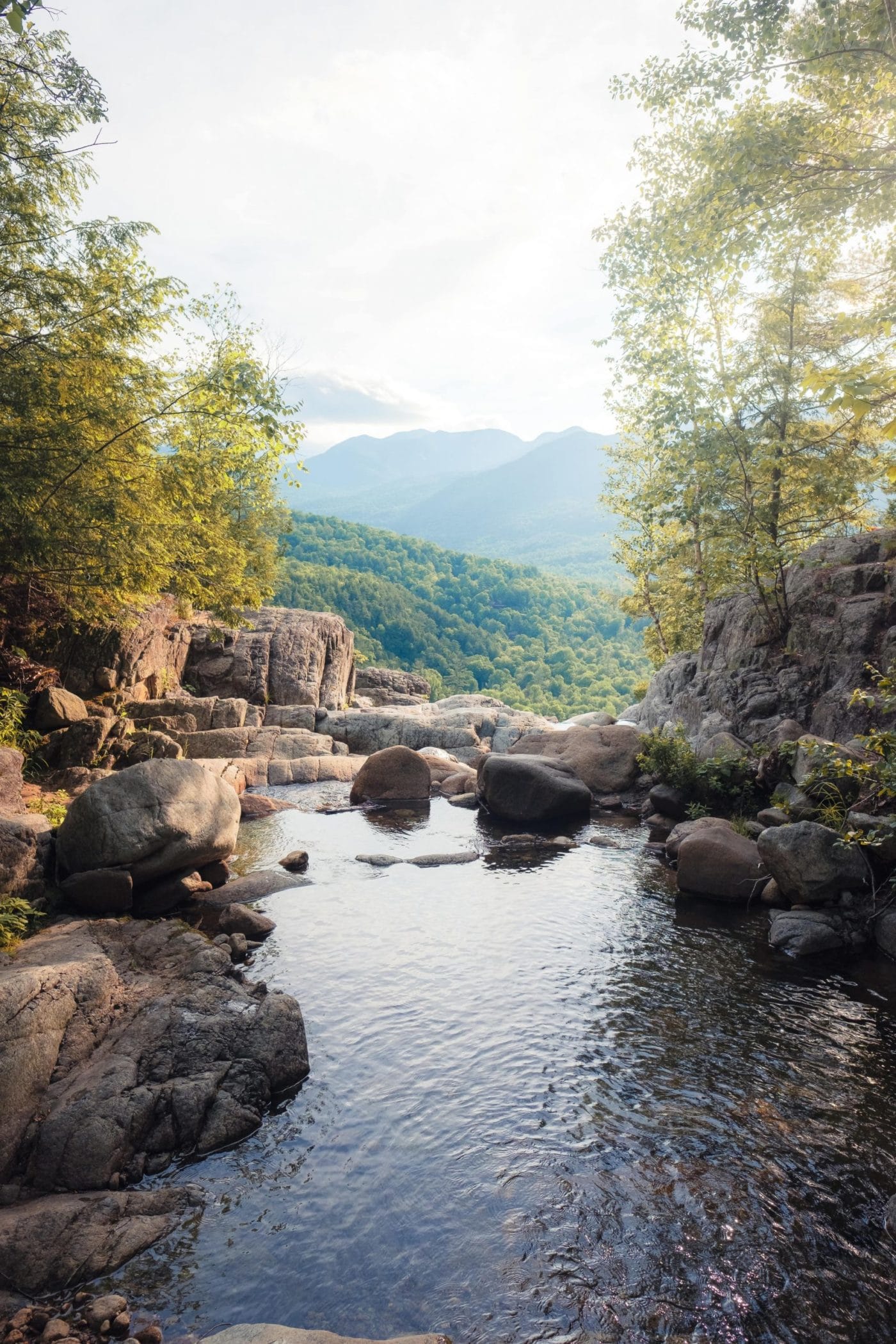 This cold, clean, running river is the perfect breeding ground for black flies in the Adirondacks
.

How to avoid buffalo gnats in the Adirondacks

.
Basically, black flies/buffalo gnats will look for any opportunity to ruin your outdoor experience, whether you’re trying to enjoy a good book on the dock or a peaceful paddle in the Ausable River.
.
Of course, to avoid black flies altogether, you can just avoid hiking in the Adirondacks during black fly season.
.
But how do you keep black flies away without sacrificing some of the best hiking weather and the less crowded trails?
.
While its near impossible to keep black flies away completely, the good news is that there are a few tried and true methods to at least keep them at bay.
.

How to avoid black flies
.

The shores of this Adirondack pond are haven for black flies
.

How to keep black flies away
.

Environmental control of Black Flies in the Adirondacks

.
So, after reading all about the horror of black fly season in the Adirondacks, you might be wondering: so what the heck are black flies good for, anyway?

Well, it may (or may not) come as a surprise to know that although black flies are a nightmare for us humans, they’re actually a super important part of the ecosystem. Black fly larvae are a vital part of the food chain around rivers and streams. And since the adults breed in fresh, clean water, scientists use black flies as indicators of a healthy ecosystem.

So, as terrible as they are for us, I guess they are good for those things. That’s basically it, though.

The annual battle with the Adirondack black flies has become more important as tourism in the Adirondacks continues to grow. I mean, who wants to see springtime in the ADK damned by swarms of flies?

In efforts lead by the New York State Department of Environmental Conservation, waterways around towns and tourist hotspots are treated with a non-toxic bacteria, to try and combat these obnoxious insects.

Bacillus thuringensis israelensis, or ‘Bti’ for short, is a naturally occurring bacteria that contains acidic proteins that essentially dissolve the insides of the black flies when they ingest them. The water treatment usually begins around early April and occurs several times throughout black fly season.

Apparently this method of black fly control is pretty effective, because towns in the Adirondacks spend tons of money on it every year.

Now if only they would apply the same type of control for the deer flies….

Visiting the Adirondacks? Here are some posts you might enjoy:

17 Cozy Cabins to Rent in the Adirondacks

Short Hikes with the Best Views in the Adirondacks

DID YOU FIND THIS POST ON ADIRONDACK BLACK FLIES HELPFUL? DON’T FORGET TO LEAVE A COMMENT AND PIN FOR LATER!

WANT TO SAVE MONEY TRAVELING?

Check out the travel resources →

Check out my list of reliable budget-friendly travel resources that are guaranteed to save you the most money, without compromising your experience.