A Glimpse Of Life Post Hurricanes In The USVI

Jolted awake. 5:50am. The vibration of the ships idling engines preceded our alarm. I clumsily climb down from the top bunk and head for the mess hall, where I chase Bonine with coffee and Ginger ale. Outside, the weather is still gray and rainy. Moored in the middle of a bay off the island, the view from the deck of the R/V F.G. Walton Smith gives us an unfamiliar view of a very familiar place. We quickly assemble our gear, gather in the skiff, and head out to the reef.

This was my third research trip to the U.S. Virgin Islands. But this time, our visit wasn’t filled with late night beach barbeques after long days of work, soggy morning walks to the lab, crowded jungle cabins, or group lunches on the dock. Instead, we were living on a research vessel while we assessed the damage left in the wakes of Hurricanes Irma and Maria on the coral reefs around St. John.

In September 2017, the USVI were hit almost head on by two Category 5 hurricanes: Hurricane Irma on September 6, followed two weeks later by Hurricane Maria. The storms delivered historic rainfall and winds reaching speeds of over 180 mph. Civilization was demolished in their wake, toppling trees, flooding sewers and streets, peeling off rooftops, and wiping out the power grid. In the best case, locals were left without electricity and running water. In the worst case, they were left without their lives.

November 17, nearly two months after the storms, we landed on St. Thomas and crossed the tarmac to a man with a small truck waiting to take us across the island to our Airbnb. As we sat, cramped and sweaty in his truck, we gazed out the windows; silence at first, taking in the sights of the hurricane’s aftermath. And then curiosity.

“How are things here?”

“If I told you the truth, you wouldn’t want to hear it”.

But we did. We listened as he described how the storms tore through the islands’ main tourism and economic hub; what a slow process rebuilding has been; and how the island’s infrastructure is made of concrete, yet there was none to be found. Irma and Maria destroyed the hardware stores on St. Croix and Puerto Rico, and whatever supplies survived were needed for themselves, leaving St. Thomas and St. John without the supplies needed to rebuild. Half of the island was still without power. The grocery stores were dimly lit by a small generator. Telephone poles leaned precariously over the roads. Cars, in single file, swerved to nearly avoid potholes that turned to craters as heavy rainfall continued. The damage to hotels was so extensive that cruise ships provided the only source of housing for thousands of relief effort volunteers. The main hospital was completely destroyed, forcing residents to rely on first aid training and a small clinic in the event of a medical emergency.

The next morning, we woke early to catch a ride into town, where we’d wait for our ship to St. John. We loaded up a small car and cautiously made our way down the mountains into town. Standing in stark contrast to the area of outer Charlotte Amalie, the harbors in town were fixed up. For those visiting and unaware of recent events, perhaps it would appear as though nothing had happened. Cruise ships delivered throngs of tourists to ports near the heart of the town, where shops and restaurants were fully operational and air conditioned. It seemed strange at first – that such a small area of the island was restored while the vast remainder, beyond the tourist hub, was still in the dark. But soon, we were given insight by our Airbnb host, who gently reminded us that the islands depend on tourism for local income and employment. How the locals appreciate the business and how there is always the chance that visitors will venture beyond the main hub to discover that much of the island is still in need of assistance. Maybe they’ll even take pictures to show family back on the mainland, raising awareness for the slow rebuilding process in the USVI. 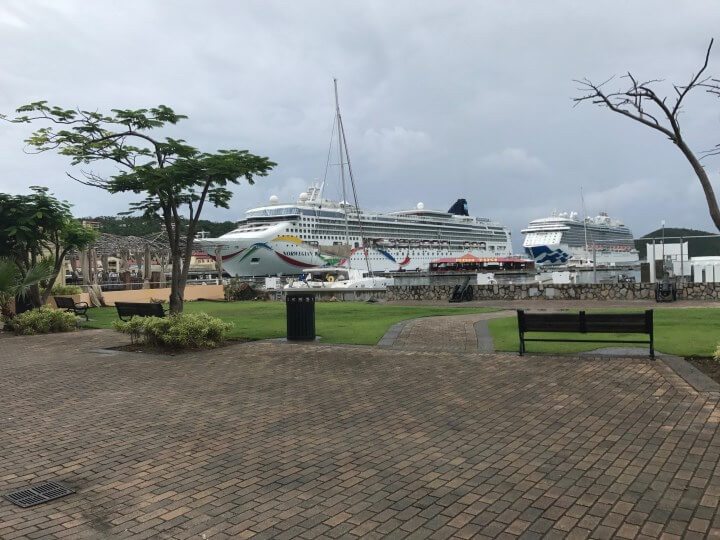 But on St. John, conditions were much worse and many residents were still grappling with daily survival. With no main economic hub, serious rebuilding and cleanup remain throughout the entire island. Without running water, rainwater is collected from cisterns for bathing and drinking. With roads narrowed or blocked entirely by debris, trash collection is challenging and piles of trash continue to grow. Bays and coves around the island are still peppered with boats overturned at their moorings from the storm surge. Blue tarps cover homes that had their roofs peeled off and their belongings exposed and scattered in the storm. The storms decimated VIERS (Virgin Islands Environmental Resource Station), the research station that we had always called home.

Unable to stay on the island, the The F. G. Walton Smith was our new home for the time we were there, moored in a bay in National Park waters off the south coast of St. John. It was several days before we were able to visit land to assess the damage at VIERS. But when our work finally called for it, we piled in a small boat off the Walton Smith and made our way to land to gather supplies left behind in the storm.

Below photos by Sigfrido Zimmermann; @sigfridozimmermann

I stood in the sun on the dock, which was somehow still in tact, watching flying fish play cat and mouse with the brown boobies. The view in front of me was relatively unchanged, save for our massive floating home in the bay and the tops of treetops broken off on the mountains in the distance. But behind me was the path to the laboratory – once a gravel walkway, was now littered with rubble from the sea. The pelicans that were once kings in the sky were nowhere to be found. The dense mangroves were almost completely gone. The lab, where we met between dives to drink coffee, organize data, and listen to the Moana soundtrack just months ago, was now deserted and heavily blanketed with a somber vibe.

We made our way up the road to the camp, dodging ponds of stagnant water and fallen tree limbs. We heard camp was bad, but I wasn’t prepared for the post-apocalyptic scene that stood before us. Every single cabin was shifted from its foundation; windows were blown out, leaving screens hanging like rags; doors swung off the hinges; some of the oldest trees had fallen, as the ground became saturated with rain and runoff; the palm trees that managed to remain upright were snapped clean at the top or otherwise completely denuded.

But in the midst of the shocking scene of what is now VIERS, is an incredible glimpse of nature’s resilience. The trees that were denuded released the understory, which wasted no time in creating new, bright green leaves in the form of vines and thick foliage. The fallen trees were still blooming, giving rise to fragrant pink flowers. And the grasses filled in, growing as tall as to poke through the boardwalk.

My heart ached as we turned to leave and the memories of the last two summers came flooding back: 12-hour work days, starting and ending with fresh mangos collected from the ground underneath the mango tree; the smell of dinner wafting through camp; post-work group yoga at the ruins next to the sea; humid morning walks to the lab, balancing full mugs of coffee while dodging puddles in the road; outdoor showers; nights filled with laughs, music, and shooting stars; all the science; arguing over who’s turn it was to clean the kitchen to keep the cockroaches at bay; 20 of us squished into a tiny, humid cabin, watching Moana while a tropical storm raged outside; sunrise hikes and sunset bbq swims; salty wine; a freezer never stocked with rum; fin blisters the size of quarters; achy muscles, mosquito bites and sand flies; and some of the greatest and smartest people I’ve ever met.I feel fortunate to have had the opportunity to make these memories, because as the rest of the island rebuilds, the future of VIERS remains uncertain.

The land isn’t the only place to feel the wrath of the the USVI’s worst natural disaster on record. Marine ecosystems also took a hit and the purpose of our trip was to study just how hard that hit was. With only two weeks aboard the Walton Smith, we were on a schedule to make three dives every day.What we found in shallow waters was the destruction we were expecting. Some sites which had been so familiar just a few months ago, had been changed beyond recognition. Sea fans, once waving rhythmically with the surge, now stand torn and ragged with wounds overgrown by ghostly whisps of cyanobacteria. Pillar corals and thrones of critically endangered staghorn corals toppled at the base. The distinct crackling of small invertebrates is now absent. Only the sound of our bubbles punctuated the silence of the reef around us. Heavy rains caused increased sedimentation and runoff in watersheds, suffocating stretches of pristine coral reefs with waving lawns of macro algae. Entire beds of sea grass along the periphery of the reef no longer exist.

But there is good news: much beauty still remains. The deeper we went, the less pronounced the destruction became. We found small schools of fish, nurse sharks, and a higher abundance of corals, which are capable of reproducing and potentially recolonizing with time. The hurricanes also present a rare opportunity for science to study the recovery process of coral reefs following a natural disaster. These data are of growing importance in a world where climate is rapidly changing and marine stressors are increasing.

Overall, there is much hope left for the recovery of the coral reefs around St. John, but it is uncertain what that recovery will look like.

Island update as of January 8, 2018: Although portions of the islands are still without electricity or running water, restoration efforts continue. Many beaches, attractions and businesses have reopened. Ships and tourists have returned.

Media may republish this video in its entirety, but may not use clips. Credits: Video of healthy reefs (0:01 to 0:21), Georgios Tsounis, California State University, Northridge. Video of reef damage and researchers at work: Jacqueline Krawiecki, University at Buffalo.

WANT TO SAVE MONEY TRAVELING?

Check out the travel resources →

Check out my list of reliable budget-friendly travel resources that are guaranteed to save you the most money, without compromising your experience.